Game Changer: How The Easton B5 Pro Big Barrel Revolutionized The Game And Is Doing It Again

Upon hearing the news, Ryan Miller headed for his garage in search of a token from his past.  Had they not just moved, he would have known exactly where to look, but boxes yet to be unpacked took away any hint as to where it could be.

Luckily, the search did not last long as it only took two boxes before Miller found what he had been looking for:  The original Easton B5 Pro Big Barrel.  Though faded from years of use, and the grip dried and cracking, it still brings a smile to Miller’s face.  “Guaranteed hit every time,” Miller said.  “Just really easy to swing and it makes a great sound when the ball connects.”

What motivated Miller to dig out his old B5 Pro was the same motivator for baseball fans and players across the nation; The release of a new and improved Easton B5 Pro Big Barrel.

“I can’t believe they are bringing this bat back,” said Miller.  “It’s just awesome.”

Easton originally started as an arrow making company in 1922 when company founder, James Easton, began manufacturing wooden arrows out of his garage in Oakland, California.  In 1939 the company introduced the world’s first aluminum arrow, which served as the basis for the creation of an aluminum bat.

“Really it was just a matter of looking around, seeing the popularity of baseball and saying, ‘Hey, why don’t we use what we know and see what we can come up with,” says Austin Hurwitz, Easton’s Director of Brand and Digital Marketing.  “That attitude is what really put Easton on the map.”

Easton’s first aluminum bats came out in the late 1960s.  With their longer lifespans and durability, aluminum bats quickly gained popularity over the next decade as they were much more cost effective than their wooden counterparts.

Though popular, those first aluminum bats were not without their faults, primarily their weight.  “It was like swinging a lead pipe,” Hurwitz bluntly explained.

Back then, aluminum bats were just as heavy as wooden bats with nothing lighter than a drop two (-2).  Easton Bats Category Manager, John Loeffler, explains this led to players making some less than ideal compromises.  “Guys were swinging bats that were only 31 to 32 inches long when really they should have been swinging something that was 33 or 34 inches.  But they couldn’t because it was just too heavy.”

Seeing the problem at hand, Easton’s engineers went to work.  From the arrow business, they had already learned how to start with a larger aluminum tube and reduce the diameter and inner wall construction to create an arrow.  They just had to translate this technique to a baseball bat.

“We started using a different alloy, something stronger and more durable,” explains Loeffler.  “We ended up creating a bat with a thinner barrel along the hitting surface.  Thinner material means lighter weight, so the bat can be made bigger.” 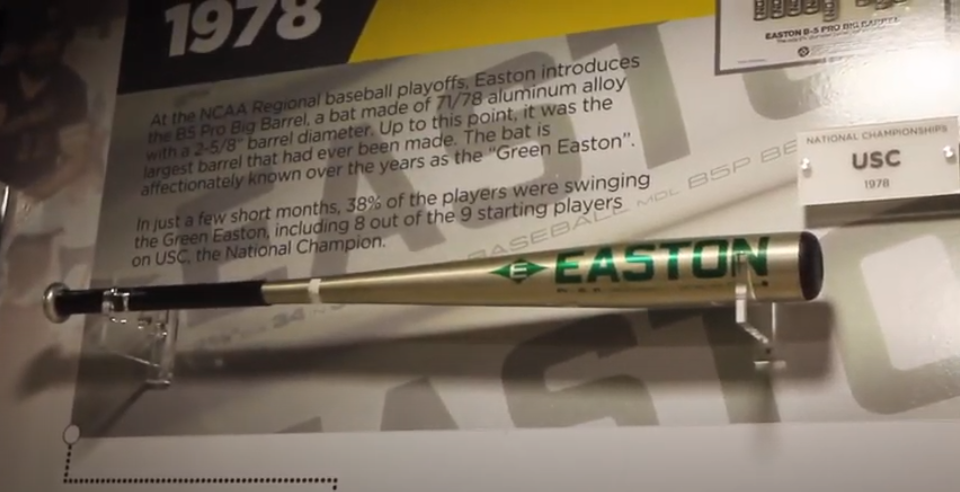 By using a lighter material, Easton was able to create aluminum bats that were longer while still keeping weight down.  “We could make a true drop 3 (-3).  We were able to make a longer barrel in a bat, lighter weight, and not sacrifice any durability,” says Loeffler.  “That was a huge step in engineering.”

That huge step resulted in the creation of the Easton B5 Pro Big Barrel in 1978, a 71/78 aluminum alloy with a 2-5/8” barrel diameter.  By providing players with a bat that was a more suitable length and an ideal weight, the B5 Pro quickly became the bat of choice for the game’s most premiere players, including players like Bo Jackson, Barry Larkin, Mark McGwire, Paul O’Neill, and Luis Gonzalez who would all go on to play Major League Baseball.  The bat became so widely known and popular it simply became known as “The Green Easton”. 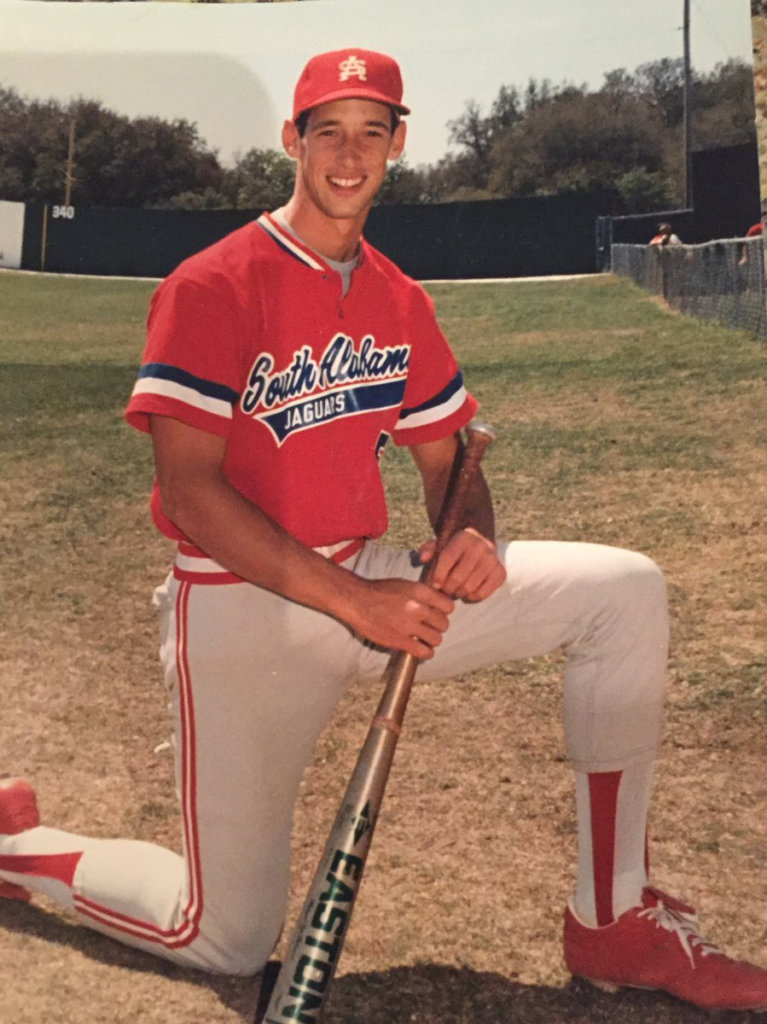 The B5 Pro was a game changer, resulting in several copycats within the industry, and it turned Easton into the name brand it is today.  Easton would continue to build on the success of the B5 Pro, improving on the design with different iterations, most notably the B9 Black Magic, a 2-3/4” barrel that copied the B5 Pro’s -3 length to weight ratio.

Now over 40 years since the original B5 Pro’s debut, Easton says the technology has finally caught back up with the industry to bring a bat back worthy of the name “B5.”

“We kicked around the idea of bringing back a one-piece aluminum bat back for a while,” says Loeffler.  “You don’t want to miss the mark and not do the name ‘B5’ justice.  But now the technology in our one-piece aluminum bats has gotten so much better, we were confident that we could put it on this one." 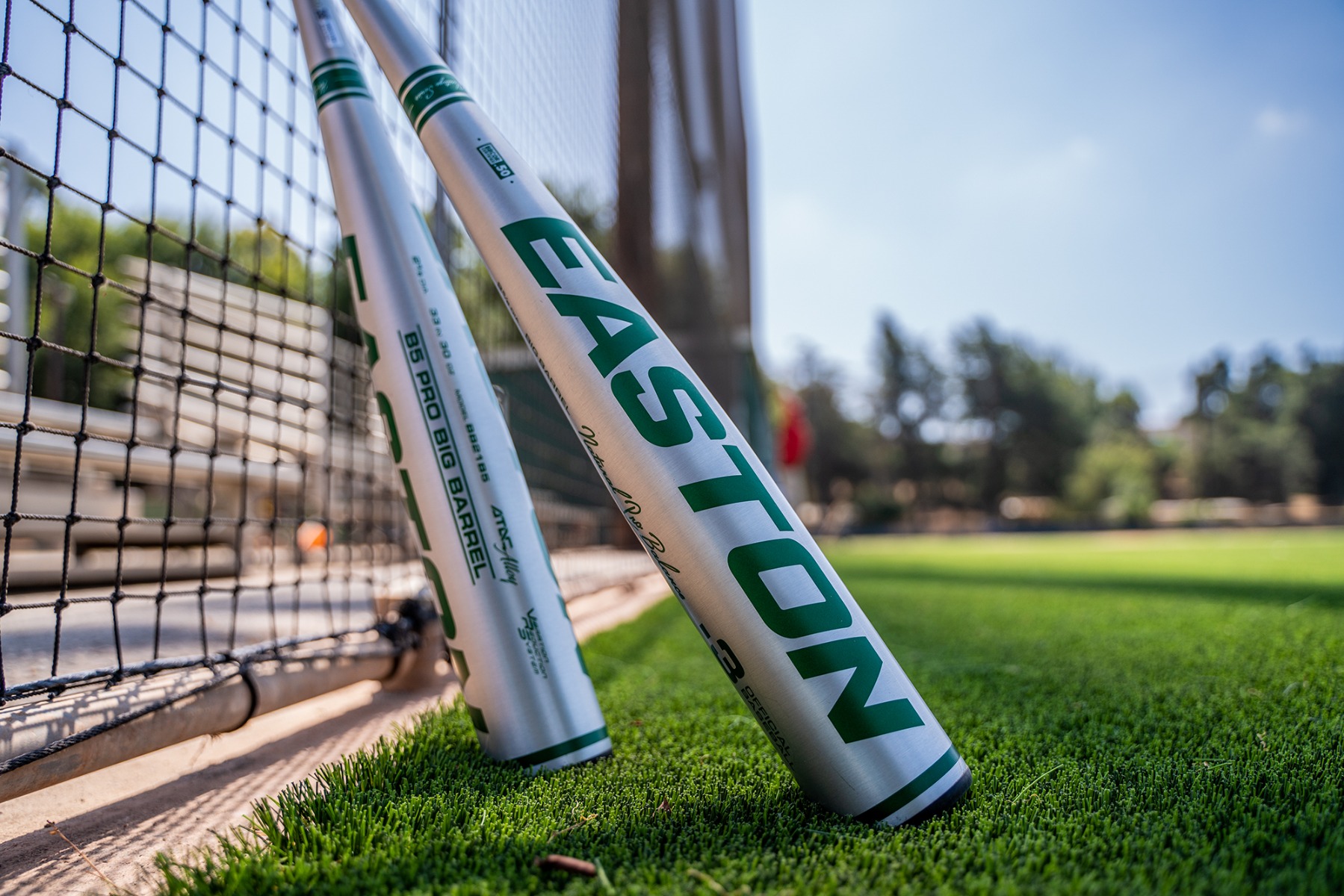 The new B5 Pro Big Barrel should be considered a technological marvel.  Featuring ringless barrel construction, the new B5 Pro improves the feel and sound of the bat while still staying within today’s rules.  “Most one-piece bats today have a restrictor ring, which is to stay within BBCOR testing laws,” explains Loeffler.  “And we were able to develop a barrel without that and still stay within the rules.  Without a restrictor ring, you have a much smoother feel when hitting the baseball at any point across the barrel.”

Along with the ringless barrel, the new B5 Pro features Advanced Thermal Alloy Construction (ATAC), which produces a bigger sweet spot than any other bat of its kind.  And, combining its construction with Easton’s Speed Cap, the B5 Pro also provides a more flexible and responsive barrel.  Additionally, the bat’s Natural Pro Balance Swing Weight results in a balanced feel for both speed and power.  Its Extra-Stiff ATAC Alloy handle transfers maximum energy into the ball for a more professional feel and performance, while Easton’s Vibration Reduction System (VRS) Handle Insert reinforces the handle to reduce vibration and create an even more solid feel.

All of this, combined with a vintage feel and the nostalgia of the original B5 Pro have produced one of the most anticipated bats in years.  “I knew there was something special about this when I showed it to high school and college kids and the feedback was overwhelmingly positive,” recalls Loeffler.  “Even if they had never heard of the B5, they loved the simplicity and throwback feel of it.  I knew this was going to be a hit.” 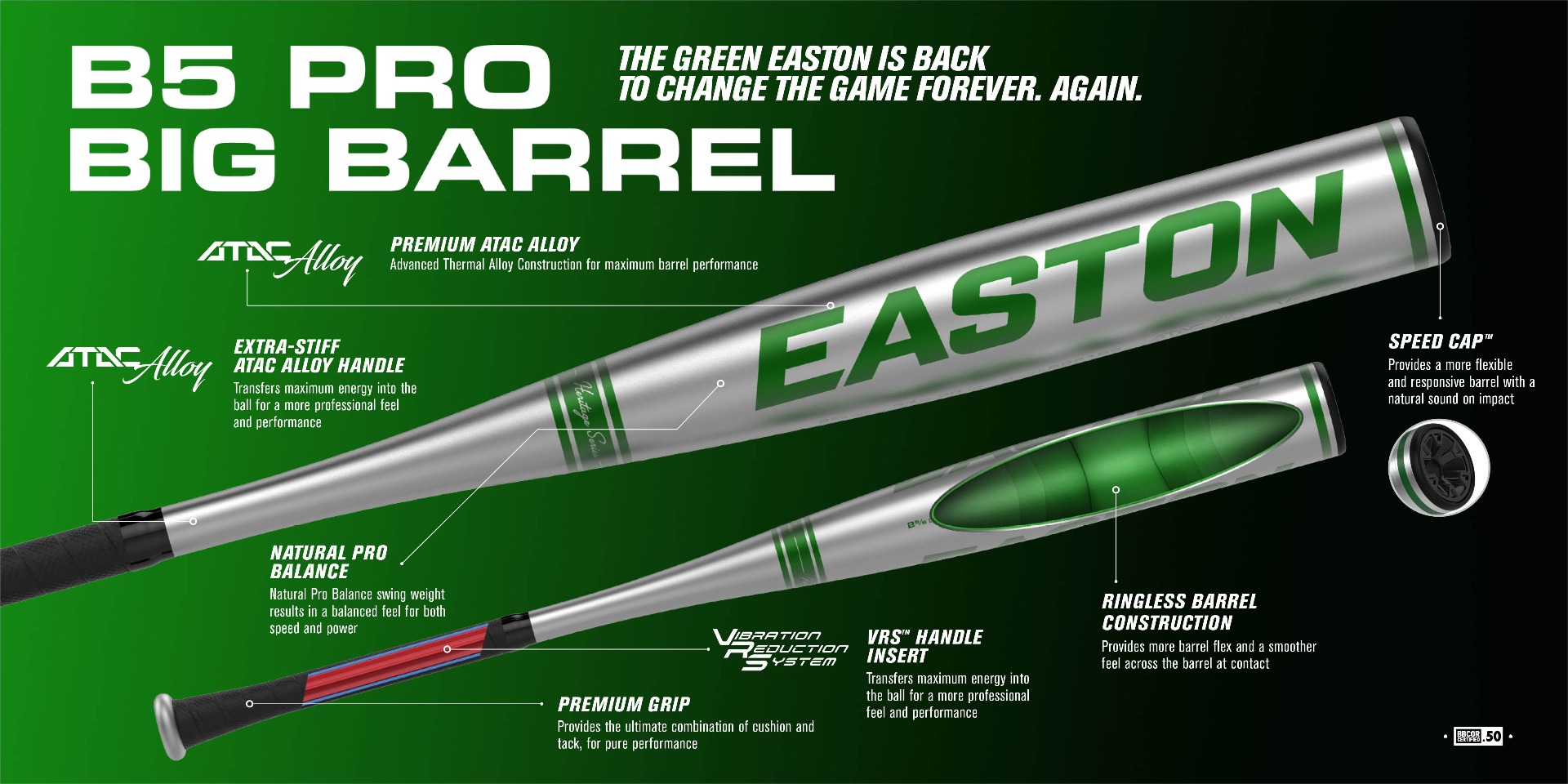 Current players are not the only ones excited, as former players and current baseball dads have taken to social media to share their B5 Pro stories from years passed, along with excitement for the beloved bat’s return, affirming that the B5 Pro, much like the game of baseball itself, is timeless.

“I just got a text from one of my buddies from my old job and he sent me a picture of himself in high school posing with the original Green Easton,” recalls Hurwitz.  “We’ve gotten more stories and people reaching out than we could have ever imagined.  This is a multi-generational thing.  We have college kids that remember hearing about this bat and we have their dads messaging us talking about how much they loved the original bat.” 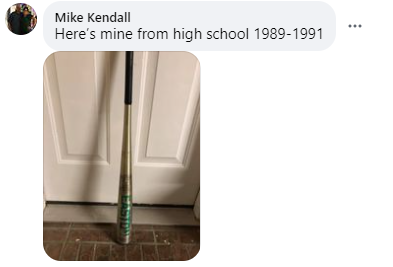 For Miller, it’s no different.  “I got my Green Easton from my dad and now I get the chance to have that connection with my kids,” says Miller.  “It’s special.”

“The coolest part about this is we always talk about these former big leaguers who swung the original,” says Loeffler.  “It’s neat to think about how the next crop of professionals could be swinging the B5 Pro in 2020, 2021.  It’s cool to think about being a part of the next generation of athletes.”

“We have such a unique advantage with the history that’s built into this,” exclaims Hurwitz.  “The bat and the story behind it are unlike anything I’ve ever been a part of.  This bridges the gap between history and what is new.”

The new 2021 Easton B5 Pro Big Barrel is now available for purchase at Baseball Express.